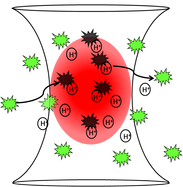 B.  Measurement of homogeneous nucleation rates:
Accurate measurement of fast homogeneous nucleation rates, and ensuring that the nucleation remains homogeneous, remains a difficult challenge faced in many areas of chemistry and physics. We tackled this challenge through a new technique we have developed: the spatial pH jump (details in section 3: Instrumentation and Methodology development).  This allows nucleation to be optically initiated in supersaturated solutions away from all surfaces, ensuring homogeneous nucleation. In addition, this betters the time resolution of conventional liquid mixing techniques by an order of magnitude, and offers single-molecule level detection sensitivity [J. Phys. Chem. A. 2009 April 30,113(18):5269-5272]. These experiments revealed that nucleation of amyloid beta is an extremely slow process at reasonable levels of super-saturation, highlighting the extra-ordinary nature of in vivo aggregation.

C.  Stability of nanocluster intermediates:
Over the last few years, there has been increasing evidence that aggregation intermediates, rather than the mature aggregates, are relevant for the biological activity of the amyloids. In fact it has been suggested that even small soluble aggregates of proteins that are not known to cause any diseases, are also toxic. Indeed, substantial concentration of soluble intermediates are commonly found, though the existence of such quasi-stable species is surprising in the framework of nucleation theory.   We examined a model that proposes that these “nanoclusters” stabilize due to a short range attraction (hydrophobic) and a long range repulsion (electrostatic). We tune the long range repulsion by studying the nanoclusters at different pH values at which the monomers become increasingly charged, and we tune the short range attraction by examining peptides with different hydrophobic residues. The stability increases with increasing charge, and decreases with increasing hydrophobicity, thus lending support to the model [Biophys.J 2009, 97(5), 1454-1460.].

D. Destabilizing the nanoclusters with Curcumin, Zn++ and Cu++
Curcumin, a component of Asian spices, is known to inhibit the toxic effects of amyloid beta. We examine the stability of the amyloid beta nanoclusters in presence of curcumin. We find that the nanoclusters are destabilized by curcumin. Concurrently, the toxicity of these specimens to cultured neurons show a reduction in presence of curcumin. Our results suggest that the curcumin-induced reduction of the nanocluster population may be a significant mechanism for the effects of curcumin on amyloid beta. Very similar results are found for the effects of Zn++ and Cu++ on these nanoclusters. Since these effects can play a significant role in modulating the course of the actual disease, we have also initiated efforts to understand the structural basis of such interactions [Garai et al., BBRC, 2006; Garai et al., Biochemistry, 2007]). 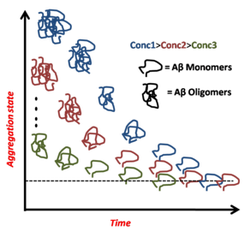 E  Investigating the monomers and the monomer-oligomer transition :
In vivo concentrations of amyloid beta is supposed to be <<1 µM, which is much lower than the saturation concentration of amyloid beta. It is therefore important to understand the nature of the species, such as monomers, dimmers and small oligomers, which exist at such concentrations. Also, the monomer to oligomer transition initiates the aggregation and pathogenic transformation of Alzheimer’s Amyloid-β (Aβ) peptide. However, the monomeric state of this aggregation-prone peptide has remained beyond the reach of most experimental techniques, and a quantitative understanding of this transition is yet to emerge. We employ single molecule level fluorescence tools to characterize the monomeric state and the monomer-oligomer transition at appropriately low concentrations in buffers mimicking the cerebrospinal fluid (CSF). Our measurements show the monomer to be a compact object with a hydrodynamic radius of 0.9 ± 0.1 nm, which confirms the prediction made by some of the in silico studies. Surprisingly, at equilibrium, both Aβ40 and Aβ42 remain predominantly monomeric up to 1.5 mM concentration. This concentration is much higher than their estimated concentrations in the CSF of either normal or diseased brains. However, we find that a strong kinetic barrier impedes the dissociation of pre-formed oligomers. Since Aβ oligomers in the CSF are generally accepted to be the key agents in Alzheimer’s pathology, our results imply that these are released in the CSF as pre-formed entities, and their metastability lets them remain toxic. We conclude that thermodynamic principles allow the development of pharmacological agents that can catalytically convert these metastable species into non-toxic monomers.