A. Imaging serotonin dynamics in a living cross section of the entire brain
The serotonergic neuronal cell bodies in the mammalian brain are located in specific areas known as the “raphe nuclei”. We have shown in our previous studies that the cell bodies can also exocytose serotonin. However, serotonin can also be located outside the cell body, e.g. in the processes and in the boutons, and it is not clear where the major sites of release are. To address this issue, we developed a serotonin imaging method which can image an entire brain section with high resolution. This is achieved by placing the tissue section on a precision motorized stage, recording the high resolution images from different parts of this section sequentially, and stitching these images with software developed in house. Our results show that the serotonin in a midbrain section is primarily located in the raphe nuclei and in the eppendymal region, with the latter having higher concentration. However, most of the release evoked by KCl treatment originates from the Raphe nucleus, showing that the somatic release of serotonin can be a dominant component of serotonin release in the brain. [Kaushalya et al., Neuroreport, 2008; Kaushalya et al., Proc. SPIE, 2008; Kaushalya et al., CRC series in Prog. Neurosci., 2007] 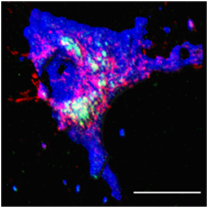 While the dynamics of exocytosis in synapses have been investigated well, somatic exocytosis remains relatively unexplored. Multiphoton microscopy is inappropriate for following this dynamics at a fast time scale. We explore this dynamics with a home built Total Internal Reflectance Fluorescence (TIRF) Microscope. The results show that the speed of vesicle movement is about ~1 micron/second. However, multiphoton imaging shows that the somatic vesicles disappear only in the time scale of a few minutes. Our results therefore imply that there is no continuous movement of the vesicles towards the periphery; rather, the movement is stochastic. [Kaushalya et al., J. Neurosci.res., 2008]

Stem cells hold the tantalizing promise of being a renewable source of body tissues. The challenge is to differentiate them into the appropriate type. It is especially difficult to obtain specific neuronal subtypes, and the lack of a diagnostic to monitor the progress of differentiating stem cells towards a specific type, e.g. the serotonergic type, is a major roadblock. Using previously developed technique of imaging serotonin in live neurons with three photon microscopy, we have monitored the progress of mouse embryonic stem cells towards a serotonergic fate, a process that takes many weeks. The images recorded over different days for a three week period clearly shows that these cells go through different stages:  upregulation of serotonin, packaging of serotonin into vesicles, and the development of exocytosis capability. These stages are corroborated by antibody labeling experiments. The major advancement is that multiphoton microscopy can monitor the serotonin distribution and dynamics in live cells as they differentiate, and can look at the same cells repeatedly, while all the other available techniques are either destructive or cannot monitor serotonin directly. This paves the way for an easier and faster development of differentiation protocols for stem cells into specific neuronal subtypes. [Kumar et al., 2009; Collaborator: Shyamala Mani, NBRC]

D Serotonin dynamics during embryo development
Serotonin appears to be a determinant in the development of the embryo from its single cell state. Both the levels and the packaging of serotonin changes as the embryo develops. These changes can be imaged in an embryo with our technique. It was found that serotonin is compartmentalized in micron-sized compartments to a rather high concentration, and its distribution changes with the developmental stage. This can be potentially important as a parameter for understanding the health of an embryo, and its potential to develop into a mature foetus. [Basu et al., Reproduction, 2008].