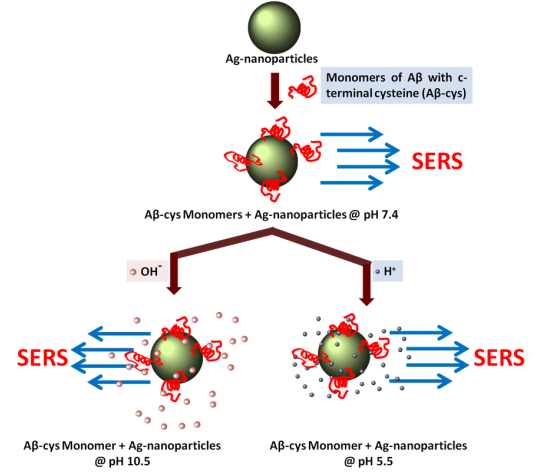 Amyloid β (Aβ) Monomers structure and monomer to oligomer transition:
A variety of neurodegenerative diseases such as Alzheimer’s, Parkinson’s and Huntington’s disease, have been shown to correlate with aggregation of specific proteins and peptides. In case of Alzheimer’s disease that role is played by an extracellular peptide Amyloid β (Aβ). As aggregation occurs, Aβ changes it structure and thereby also its function. Understanding of these structural transitions, in each possible step of aggregation, is a necessary requirement for understanding the toxic functional change associated with it. However, in physiological conditions determination of these evolving structures are still open challenge(s), owing to low solubility, heterogeneity and transient nature of some particular species in the aggregation pathway. As different species evolves during aggregation, isolation and stabilization of all possible individual species is necessary to deduce any structural insight.
Surface Enhanced Raman Spectroscopy (SERS) to deduce monomer conformation: As a first step we have tried to determine the conformation of Amyloid-β40 monomers in solution at physiological pH and temperature by the help of SERS. In this experiment we have attached monomers of Aβ1-40 (having an extra cysteine at the C-terminus, Aβ40-Cys) directly on to silver nanoparticle surfaces and have seen the monomer structure being predominantly α-helical. 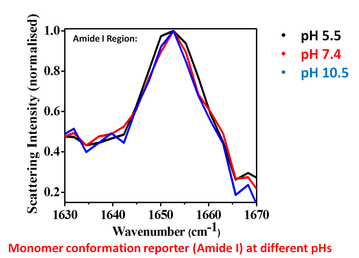