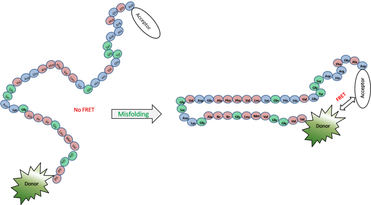 A. FRET Measurements:
The pathological hallmark of Alzheimer’s disease is the neural deposition of self-assembled fibrillar aggregates of the 39-42 residue long peptides Amyloid beta (Aβ). Aβ, which are unstructured in the monomeric state, go on to form characteristic beta-hairpin like structures in the fibrillar aggregates through a ‘misfolding’ step. On the way of transition from the monomeric peptide to fibrils Aβ forms a wide variety of species of different sizes and some of them are related to the toxicity. The hairpin like ‘misfolding’ of the peptide seems to a critical phenomenon for the aggregation and may also be strongly related to the toxicity.
Here we ask in which stage of the Aβ aggregation the misfolding occurs. To address the problem we probe the distance between the two ends of Aβ peptide, labeled with a donor-acceptor FRET pair at the two termini, in the various species formed during aggregation. The aggregate species are classified by an FCS measurement on the same specimens. We have synthesized a FRET-pair labeled Aβ peptide to investigate this issue.  A study of the lifetime of the fluorophore reports the end to end distance of this peptide in the monomeric as well as in the aggregated state  reveals a major conformational transition between the monomer/small oligomer species (~1nm)  and the larger oligomeric species (>2 nm)

B. Atomic level structure :
Ultimately, a deeper understanding of the misfolding and aggregation would require the atomic level structure of amyloid beta. This is a difficult problem, as the protein is insoluble at concentrations required for solution NMR experiments, and also does not produce crystals amenable to X-Ray crystallography. Solid state NMR seems to be the most powerful technique for such investigations. It is in principle possible to arrest the system at different stages of aggregation and investigate it with ssNMR, and we have embarked on this venture in collaboration with the group of P. K. Madhu. We have synthesized isotopically labeled Amyloid beta peptide and obtained our first high quality NMR spectrum from the Aβ(18-35) peptide fragment. It shows that the conformation of this fragment is very similar to the full-length peptide.We are currently determining the conformation of the full length peptide and the changes induced by its interaction with Curcumin and Zn++.